Breaking News
Home / Sport / Gundogan: If Man City don’t win the Champions League there will always be something missing

Gundogan: If Man City don’t win the Champions League there will always be something missing Istanbul, May 30, 2020. It’s a destination and occasion that would mark the perfect end to the season for Manchester City midfielder Ilkay Gundogan.

The city is a special place for the Germany international born to Turkish parents – a place he often visits to see friends and family. And at the end of May, the Ataturk Stadium on the western outskirts of the city will host this season’s Champions League final.

Gundogan would love to be there. He has a spectacular collection of medals but the Champions League is missing. It’s the one he wants more than any other.

The 29-year-old played a significant role in City’s back-to-back title triumphs as well as winning the FA Cup and League Cup twice during his four seasons in England. Before that he won every domestic trophy available at Borussia Dortmund. Jurgen Klopp’s great side of eight years ago were the last to stop Bayern Munich winning the Bundesliga crown but their German rivals recovered the year after, winning the treble including a heart-breaking last-minute 2-1 Champions League victory over Dortmund at Wembley.

“I don’t believe it’s going to be my only final – of course,” Gundogan told Goal. “I hope so too. I don’t actually have much time, that’s why I try to push my team-mates as much as possible.

“But yeah, I’m confident that we have all the opportunities to get to a Champions League final.”

Like Gundogan, the Champions League is also missing from City’s collection and it remains the prize most coveted by the club’s hierarchy. City have been heralded as one of the greatest teams in Premier League history after setting the highest-ever points tally in their last two title-winning seasons. But Gundogan believes they will only cement their place amongst the greatest sides in history if they can finally end their wait for Champions League success.

He added: “The Champions League is maybe the most prestigious competition in the game and if you don’t win it, as much as we are a great team, you feel like there’s always something missing.

“Obviously, we try to do our best but it’s not something that you can talk about and then it comes. It’s something you have to try to achieve.” 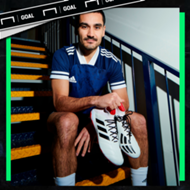 City’s dream faces an early test with the mouth-watering challenge of 13-times record winners Real Madrid in the last 16. The Spanish giants stopped City on their best ever run in the competition in 2016 when they won by just a single goal at the Bernabeu, two months before Gundogan’s arrival.

Guardiola believes it is harder for City to succeed in Europe because they do not have the same history and experience in the competition but Gundogan says that a big result could change the narrative.

He said: “It’s so difficult to explain it – I think we need we need a big game that we win. And to get through thinking ‘this was so hard today’, where we need to struggle as well. We have to overcome difficulties, something like that is needed.

“That’s why I think you learn from games like away in Atalanta – having one man down and Kyle Walker as a goalkeeper – or at home against Shakhtar and you struggle and it’s not a great performance and you just draw. These kind of games are also important.

“You cannot just win every single game by three, four or five goals and then when you come into the last 16 playing a good team, 1-0 down, expect to turn it around easily. It’s not always like that. I think struggles are part of our profession. And it’s always about overcoming these kind of moments.”

Conceding goals has been City’s biggest problem in Europe. In their three exits under Guardiola, the Premier League champions let in six against Monaco, five against Liverpool and four in last season’s dramatic defeat to Tottenham. Guardiola isn’t about to take a backward step in the competition and will continue to play with his usual high defensive line in Europe with all its risk and reward.

It’s crucial that City play with confidence and Gundogan admits that it’s not always something that can be switched on in difficult times. “It’s important in sport and life, if you do something with confidence you always do it better,” he said. “That’s the same in football and everything else.

“It’s harder [in bigger games]. But I think it’s also something you can you can build up during a game. Having successful moments in a game, like scoring or whatever, always gives you that lift. But it can be the opposite sometimes – things go wrong, it’s totally normal, you fail and your confidence decreases.

A recent run of nine wins in 10 games should be a confidence booster ahead of next month’s trip to Spain for the first leg. But Gundogan knows there is an awfully long way to go before that dream of a perfect night in Istanbul can become a reality.